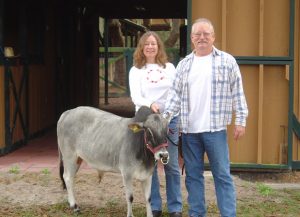 Right after we decided to get married, John took a trip to see the MotoGP at Laguna Seca Raceway in California with his cousin, Bob.   (We’re both motorcyclists–see John’s website at www.JohnnysToyBox.com .)  While he was gone, I found my beloved cat, Muffin, dead on my apartment floor.  Distraught the next day, I decided to take a drive.  “Back in the day,” a drive always made me feel better.  After all, we were getting married–we had to find a place to live.   My travels led me to a small town called Christmas.  I had driven through it before but never stopped.  I found myself on a dirt road and passed a home that had a “for sale” sign in the yard.  It was situated on approximately 2.5 acres–big enough to have a few animals, but not too large that we couldn’t take care of it.  It was mostly cleared and was located on one of the higher points of land in Christmas.    I saw a lot of potential…as a child growing up, all I wanted to do was have a farm –that was my dream.    My childhood toys consisted of plastic farm sets, complete with animals, barns, fencing, and tractors; any non-breakable horse statue that could go outside; and my Johnny West dolls, horses, ranch and jeep with trailer.  I watched Fury, The Roy Rogers Show and any westerns I could every Saturday morning and afternoon.  When I was a five-year-old girl, we lived in the suburbs of Toronto , Ontario , Canada ; and when we went into the city we would pass a farm that had what looked like hundreds of ponies in the fields surrounding an old barn.  One day, I decided to get me a pony–he had so many, surely the farmer would not miss one!  I had gotten a stuffed horse with a red plastic bridle for Christmas the previous year.  I got the bridle off the stuffed horse and took it with me, along with my brother Frank (who was only three at the time), and set out on my mission.  It was about a mile away, over busy streets; but I always stayed on the sidewalk and had a good hold of Frank’s hand.  We reached our destination about 25 minutes later and I proceeded to climb the fence to get my pony, plastic bridle in hand.  I saw and heard the farmer coming in from the field, yelling at me “What are you doing–you better get home!”  I got off the fence, grabbed ahold of Frank, and off we went home.   We did make it home– and the details after that are sketchy; but suffice it to say, that the love of animals was something I was born with, and it’s just gotten stronger every year of my life.

That brings me back to our place in Christmas–after John got back from California , we both went out to look at the property; and by July of 1989, we owned our first house.  We got married in the house in August of that year and started planning.  We were very fortunate to have had the help and expertise from my brother, Billy, as well as “a little help from our friends” through the years to grow our ranch from the small house we bought in 1989 to the ranch it is today.

We started out by putting in the pool–my dad said we’d really enjoy having it when we were done with all our work.  He was right.  After that, we built our big barn, along with a lot of fence, all in preparation for getting some large horses, appaloosas preferably!  Always a love for color.  We had two appaloosas, a quarter horse and a Thoroughbred from 1994 through 1997.  Two of our horses were “free” horses….so you know what that means.  One shown below on the right was Navy–she was 29 years old when we got her and she was blind in one eye, but she could move like she was a lot younger and was a great horse for John and his son, Race, to learn how to ride. 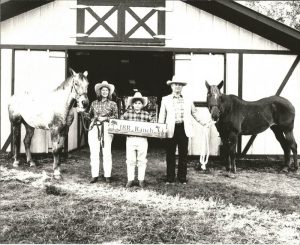 We then fell in love with miniature horses, sold our big horses and started raising miniature appaloosas in 1997.  We had a lot of fun, but there was a lot of heartache, too.  Minis were definitely harder to figure out than their larger counterparts.  Living in Florida , we had a lot sand and other issues.  We decided to sell all our horses in 2010 for many reasons, and it was one of the hardest things I had to do. 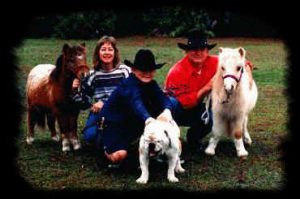 Fast forward to October 2012, and we have fallen in love with miniature zebu cattle.  I had been talking about getting miniature cows since 2004 and actually had bought three, but Hurricane Frances in 2004 killed that idea since we had to evacuate and didn’t know if we’d have a place left when we got back.  I reluctantly decided to put the cattle on hold.  In mid-2012, I realized I really missed having livestock, so I  tried to figure out how miniature cattle would work in our lives.  Our barns had been empty for almost two years.  We both agreed it was a shame to not use any of the buildings, all the fence and the grass.  We’re not sure where we’ll go with this, but the cattle are so much easier to care for than the horses–and that makes a difference to us.  They are as friendly as the horses, and each has its own personality.  The calves are just adorable, and they will steal your heart.   The cattle mow my grass for me and keep the pastures perfectly manicured, and it’s so nice to look outside and see the cattle or walk amongst them–the calming effect is just great!